We are looking for staff members! Are you or do you know someone who wants to become part of our dream team? Check out our job openings for more information or apply right away at this link. Simply dropping by for an application form is of course also possible.

Coffeeshop Joint Venture is only accessible to persons aged 18 or over. For this we require all our guests to provide proof of identity. 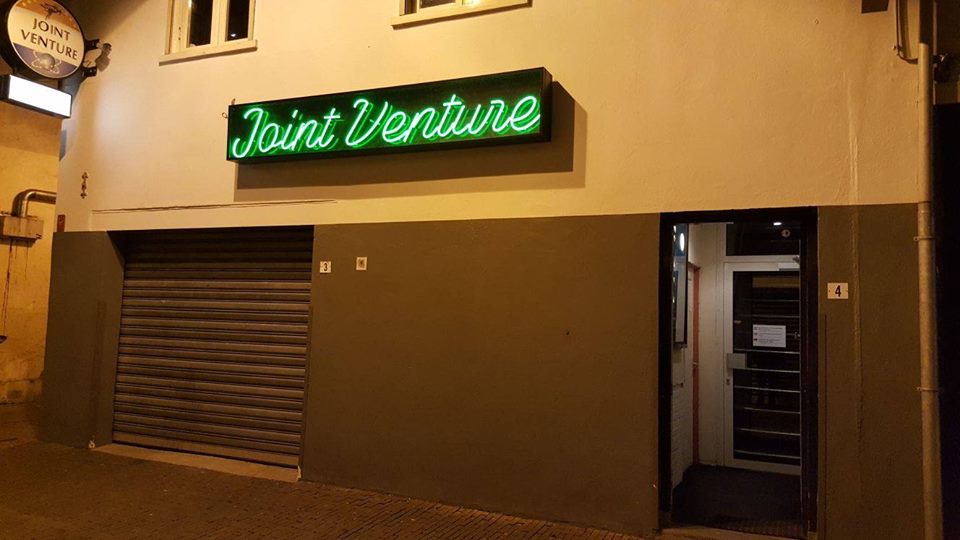 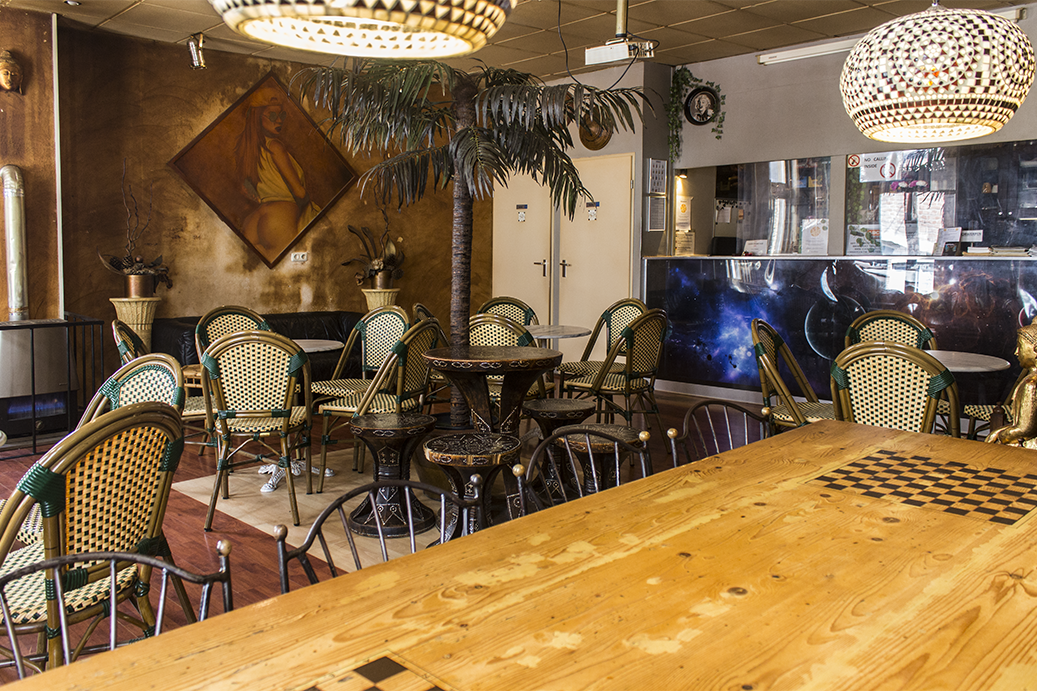 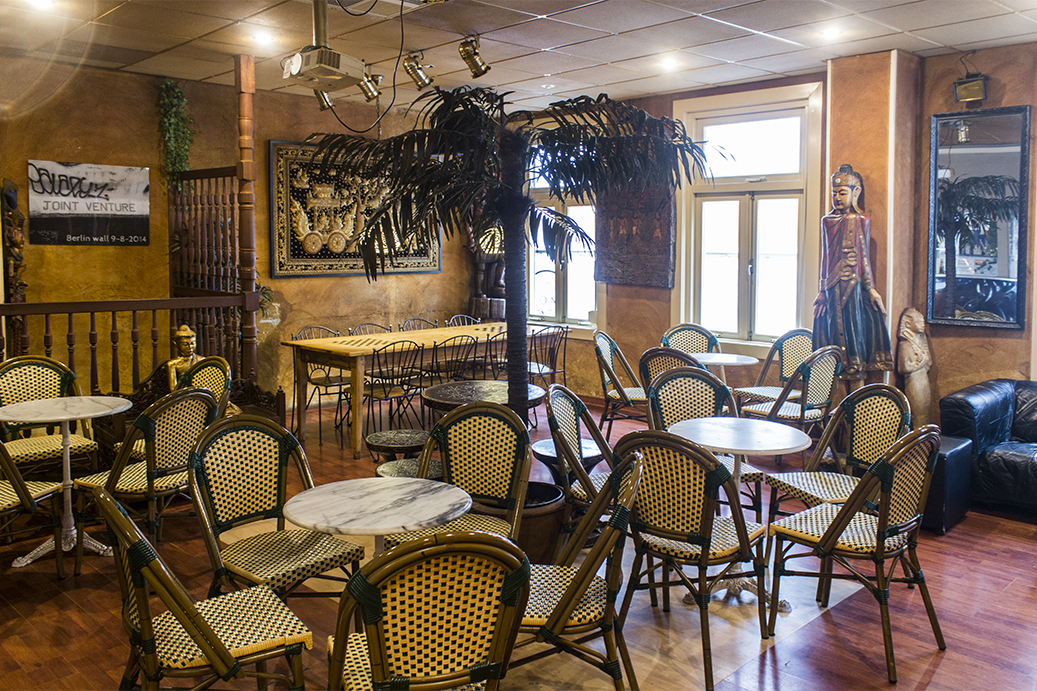 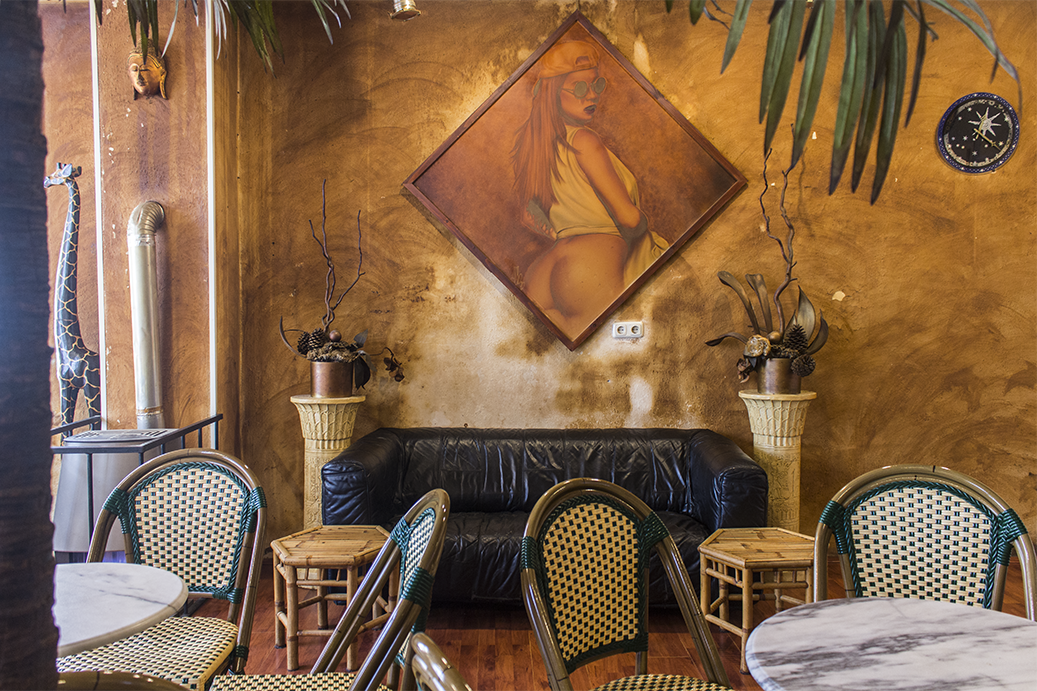 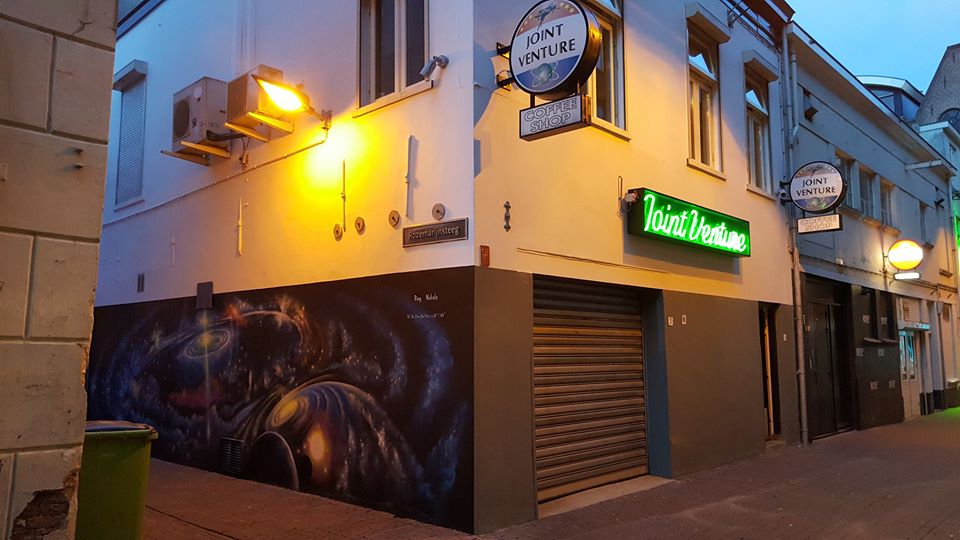 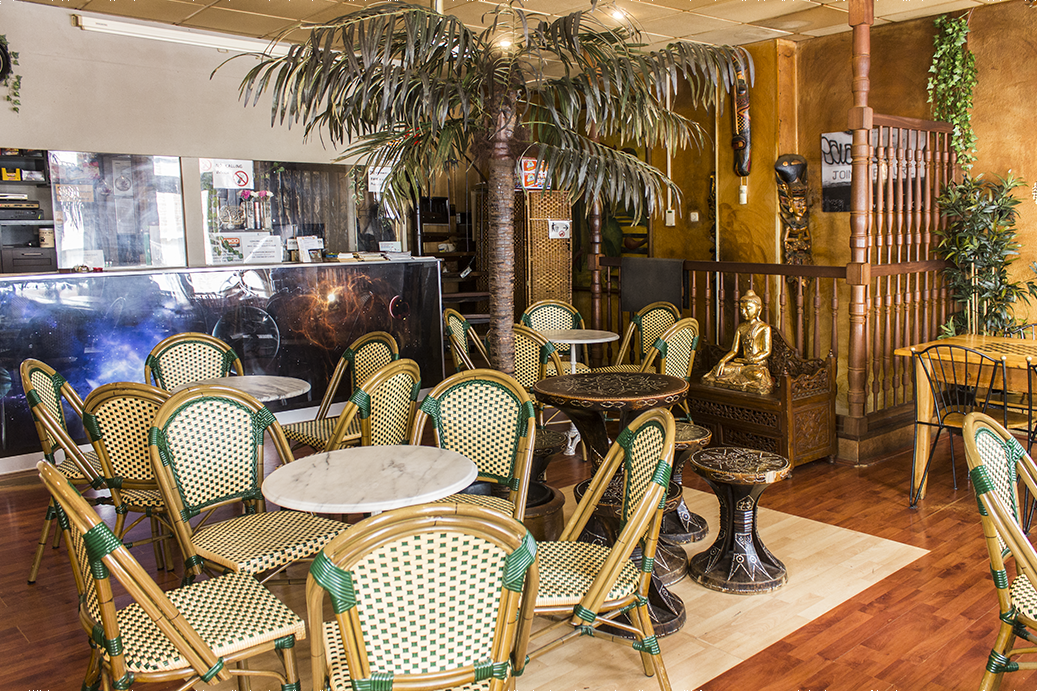 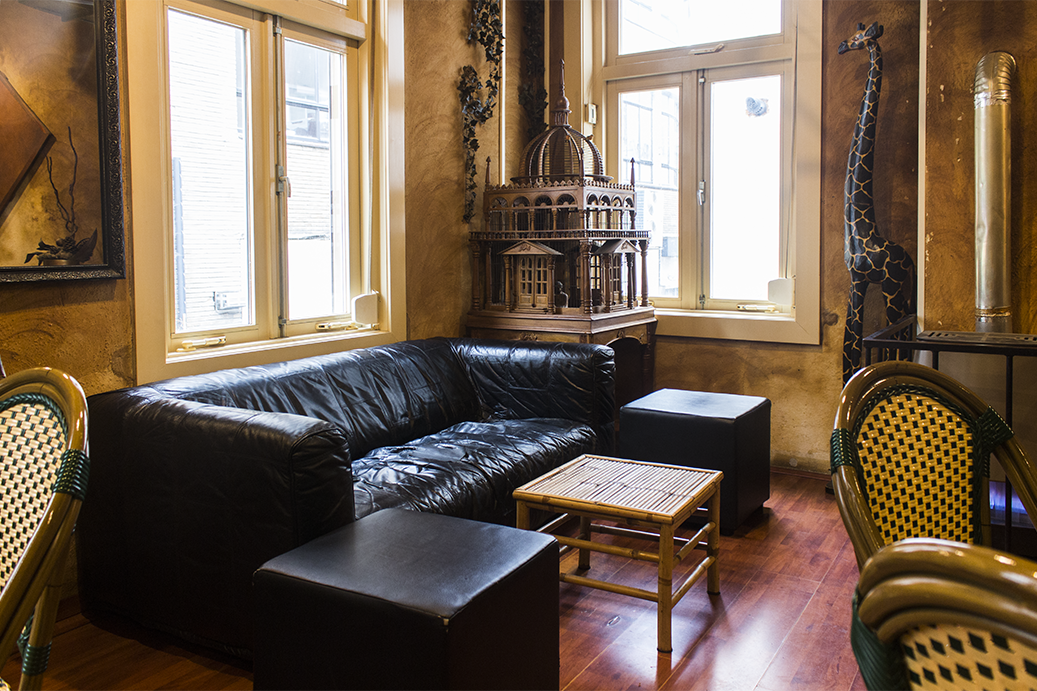 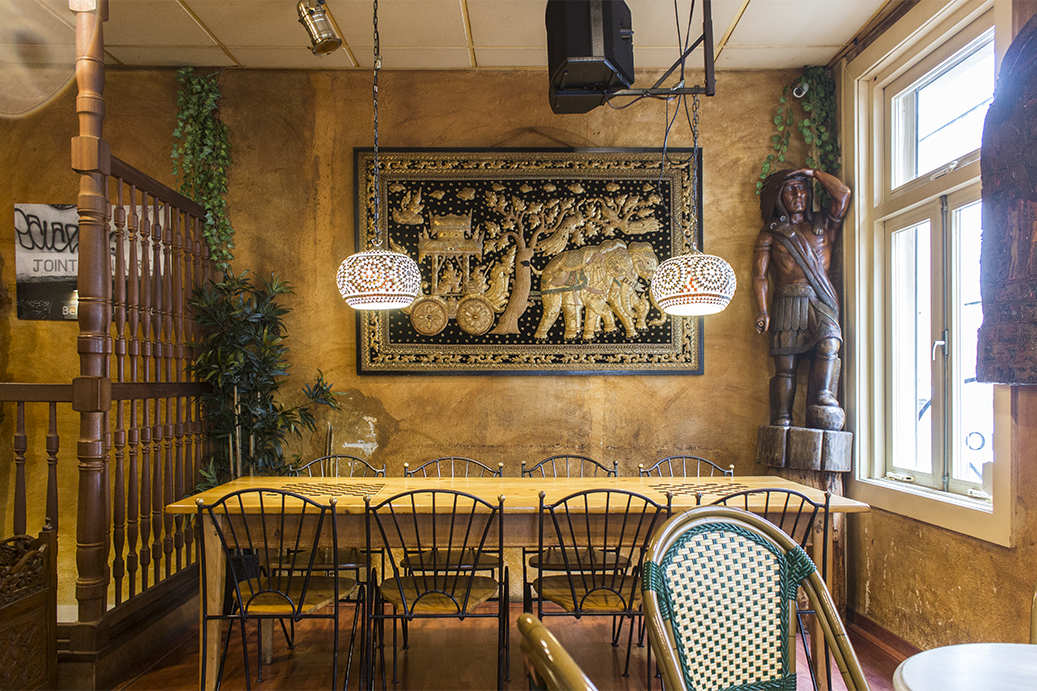 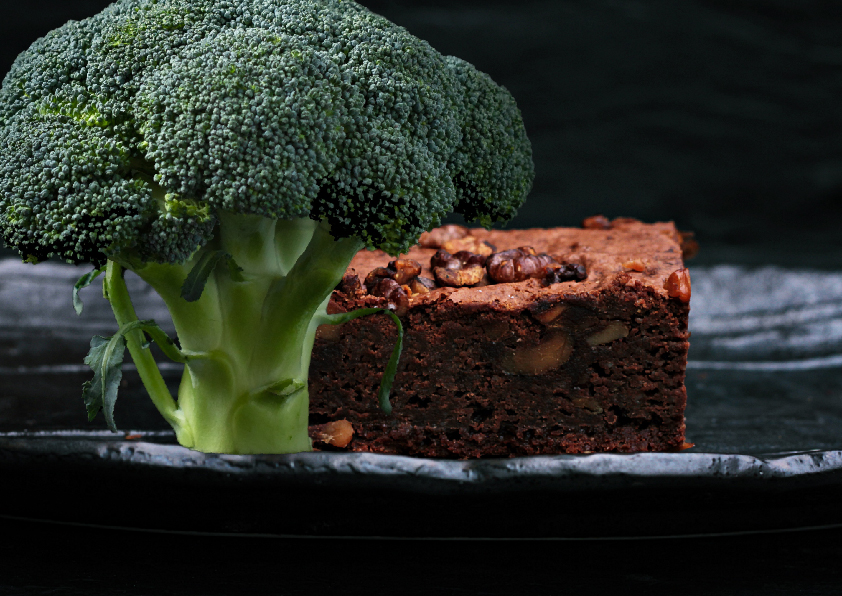 At Joint Venture we have an extensive range consisting of weed, hashish and pre-rolled joints. You can also come to us for related products such as filters and rolling paper. We do not sell edibles or moonrocks. 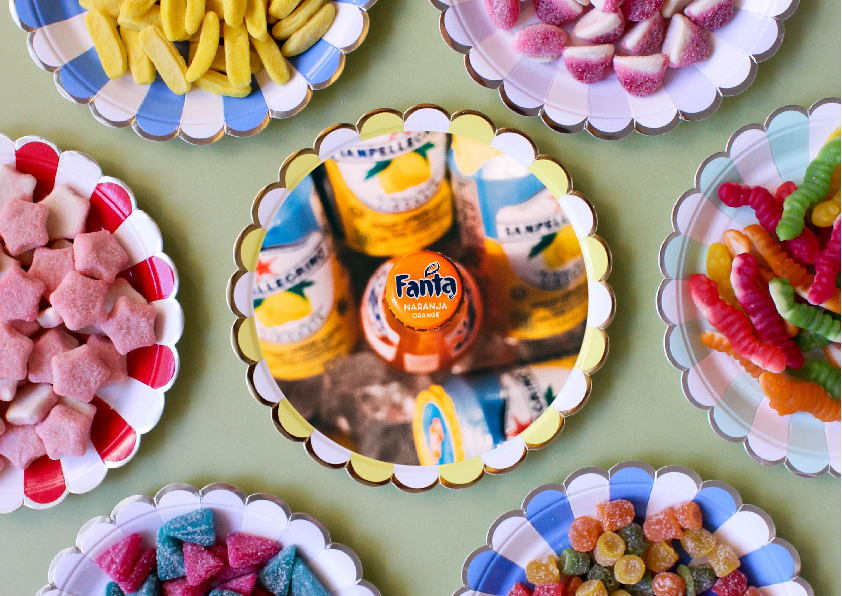 Do you have the munchies or a dry mouth? You can come to us at the bar for a snack. We sell cold drinks and there is a wide range of cookies, candy, chocolate and chips. 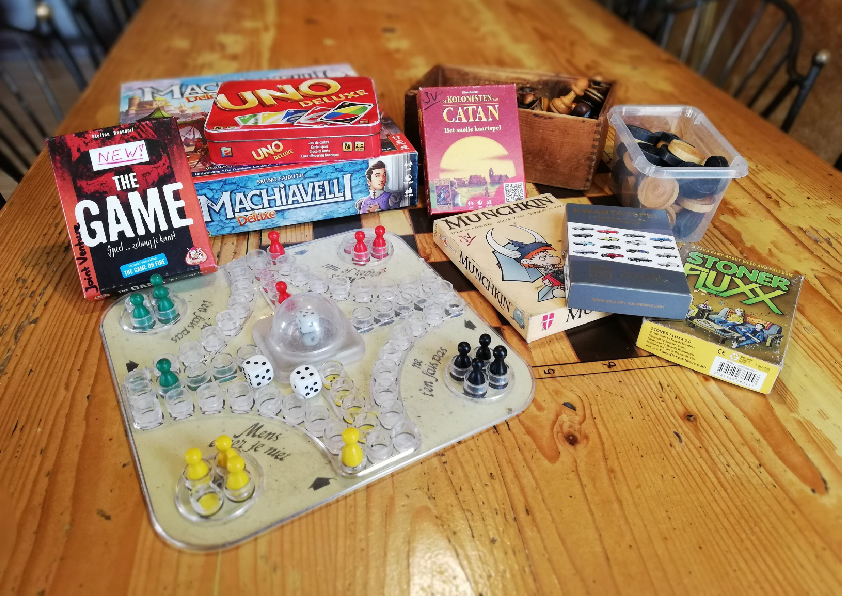 Play old skool (board) games! You can do this with ease at Joint Venture. We have a cabinet full of games that you can borrow. You can see a 'small' selection on the picture presented above.

Joint Venture opened its doors in May 1990 and started as an art gallery in the Munterstraat. The former office building was decorated with paintings and later also with sculptures. All this could be viewed while smoking a joint. 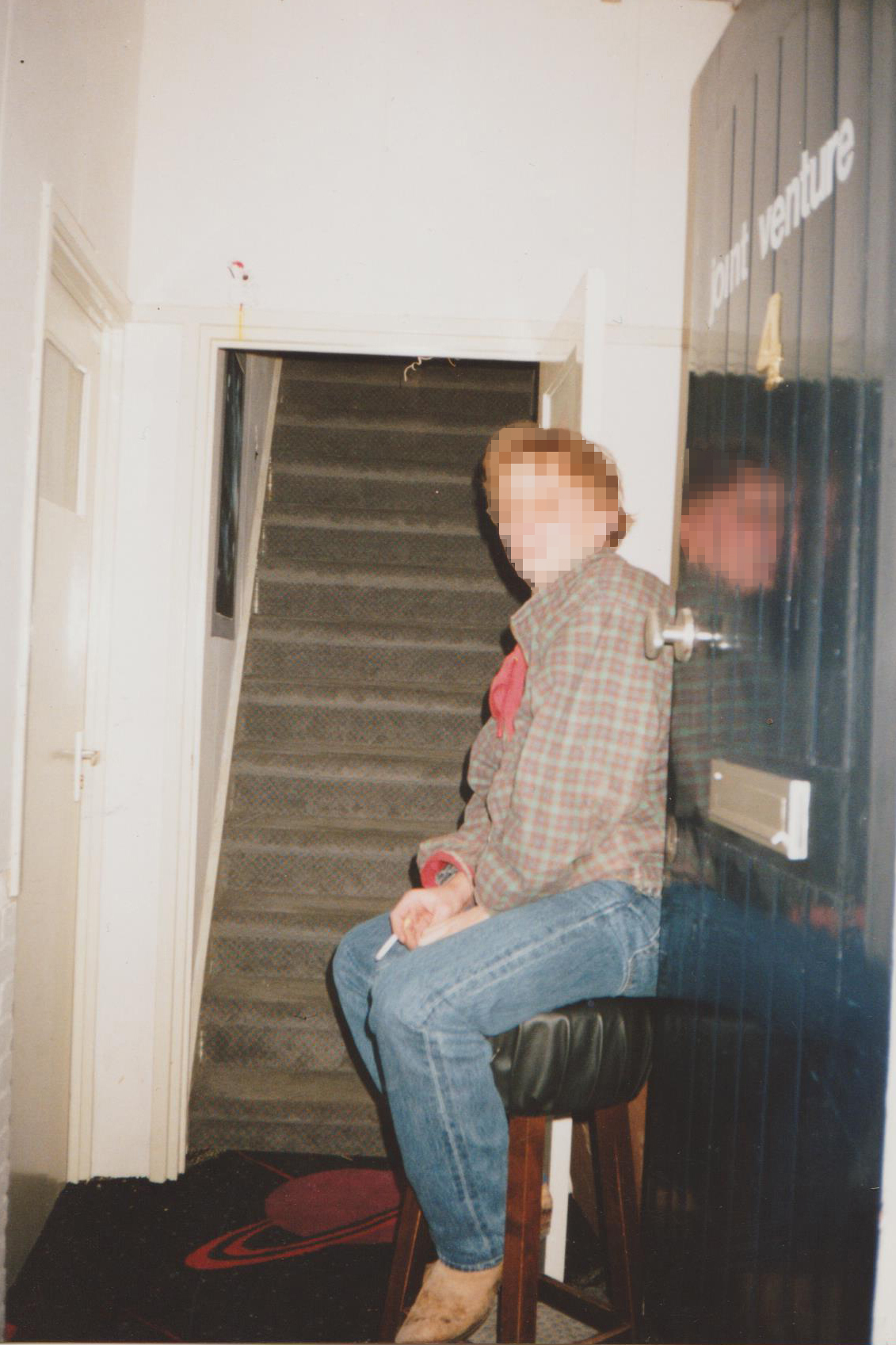 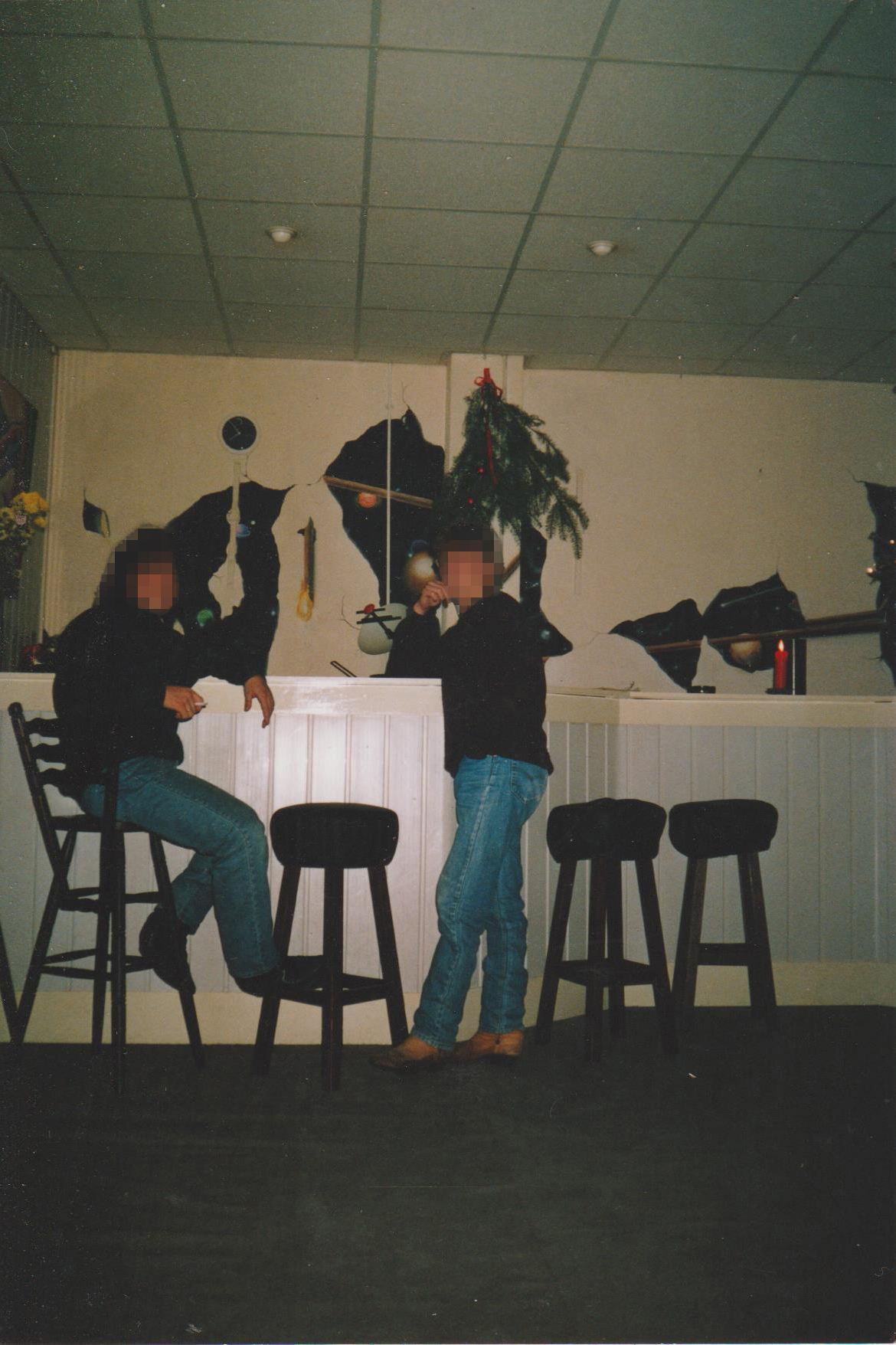 You could buy hashish at the counter, which at the time was also a work of art itself in terms of shape. The weed followed shortly after. The interior consisted of lounge sofas and plastic garden chairs. The white marble tables were already there at the time. At this time, the age limit was 16 years and you had to ring the bell before the door opened and you could go inside. A few years later, the doors opened to the public. 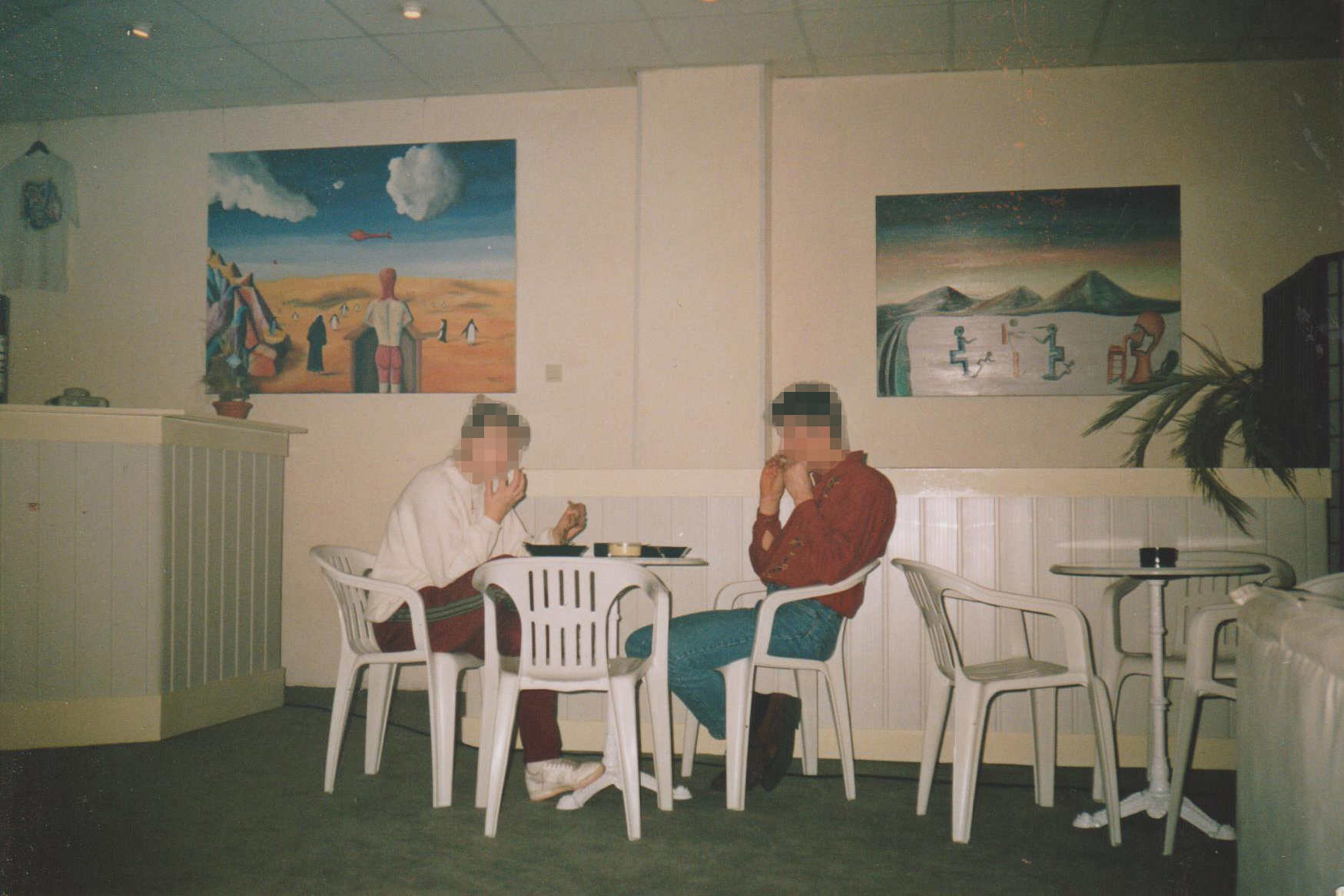 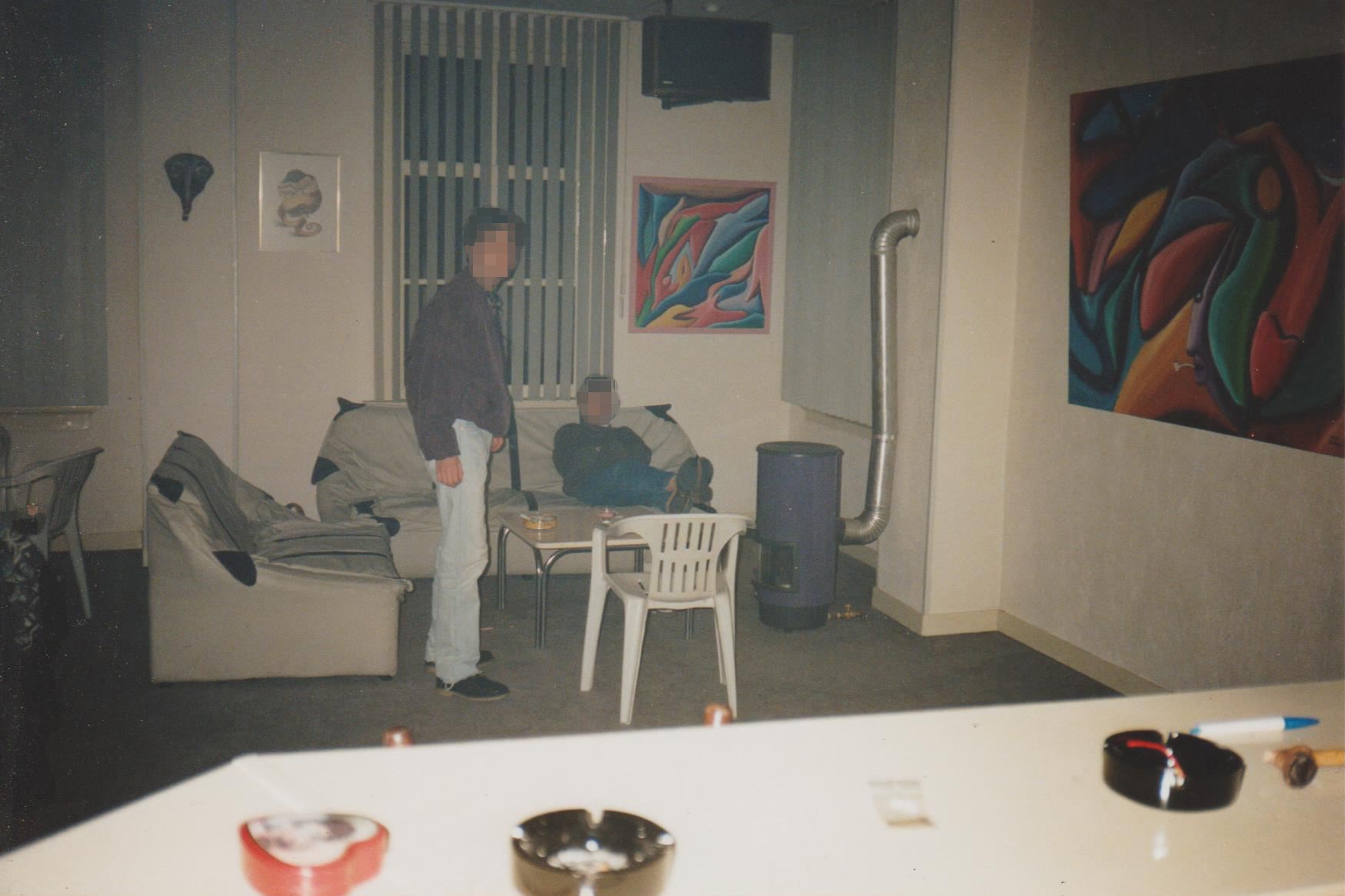 In the 90s, there regularly were private parties, such as during Christmas and New Year's Eve. Similarly in 1996, regular friends of JV gathered together for a pleasant evening with good food and lots of drinks. 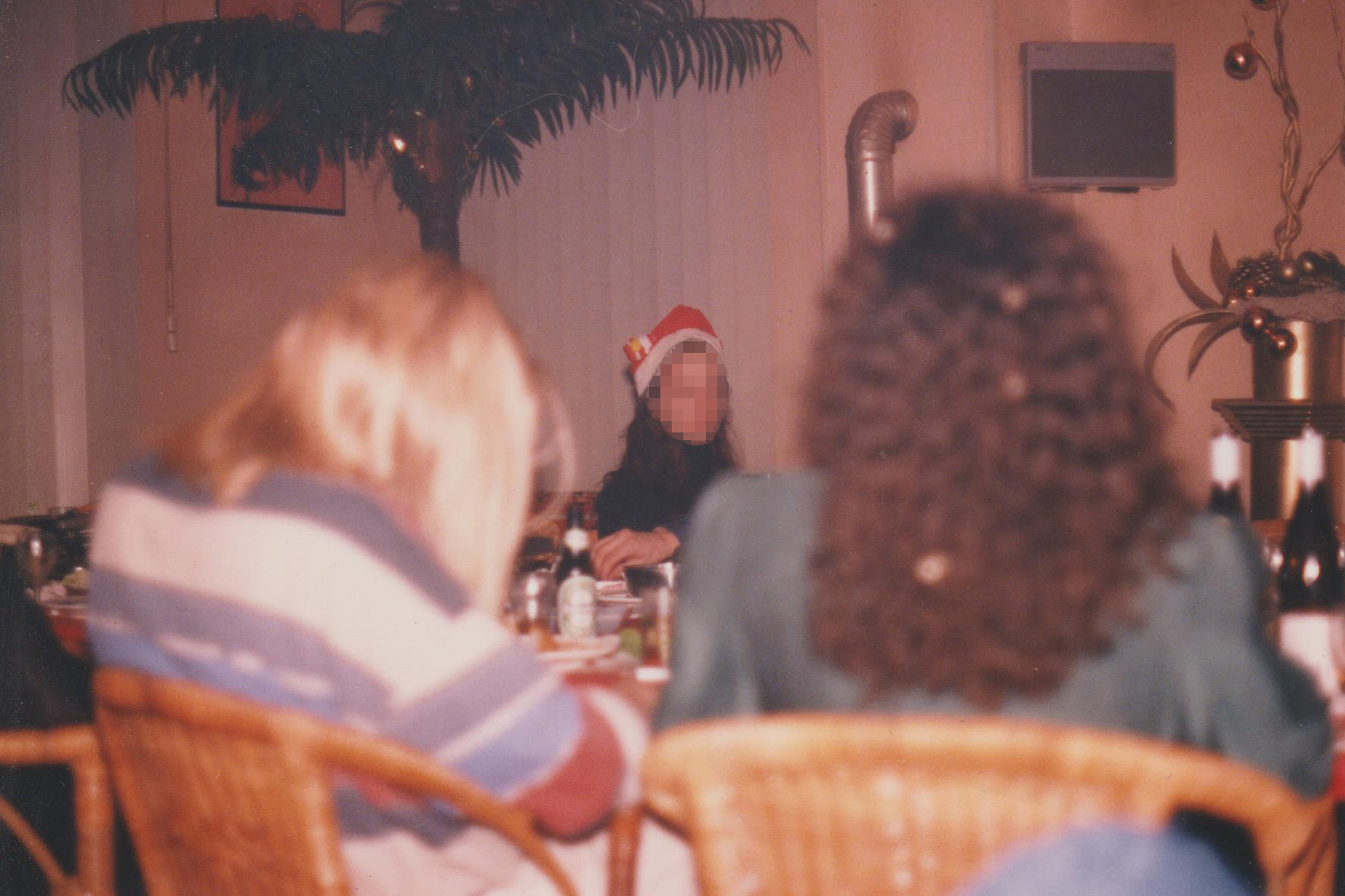 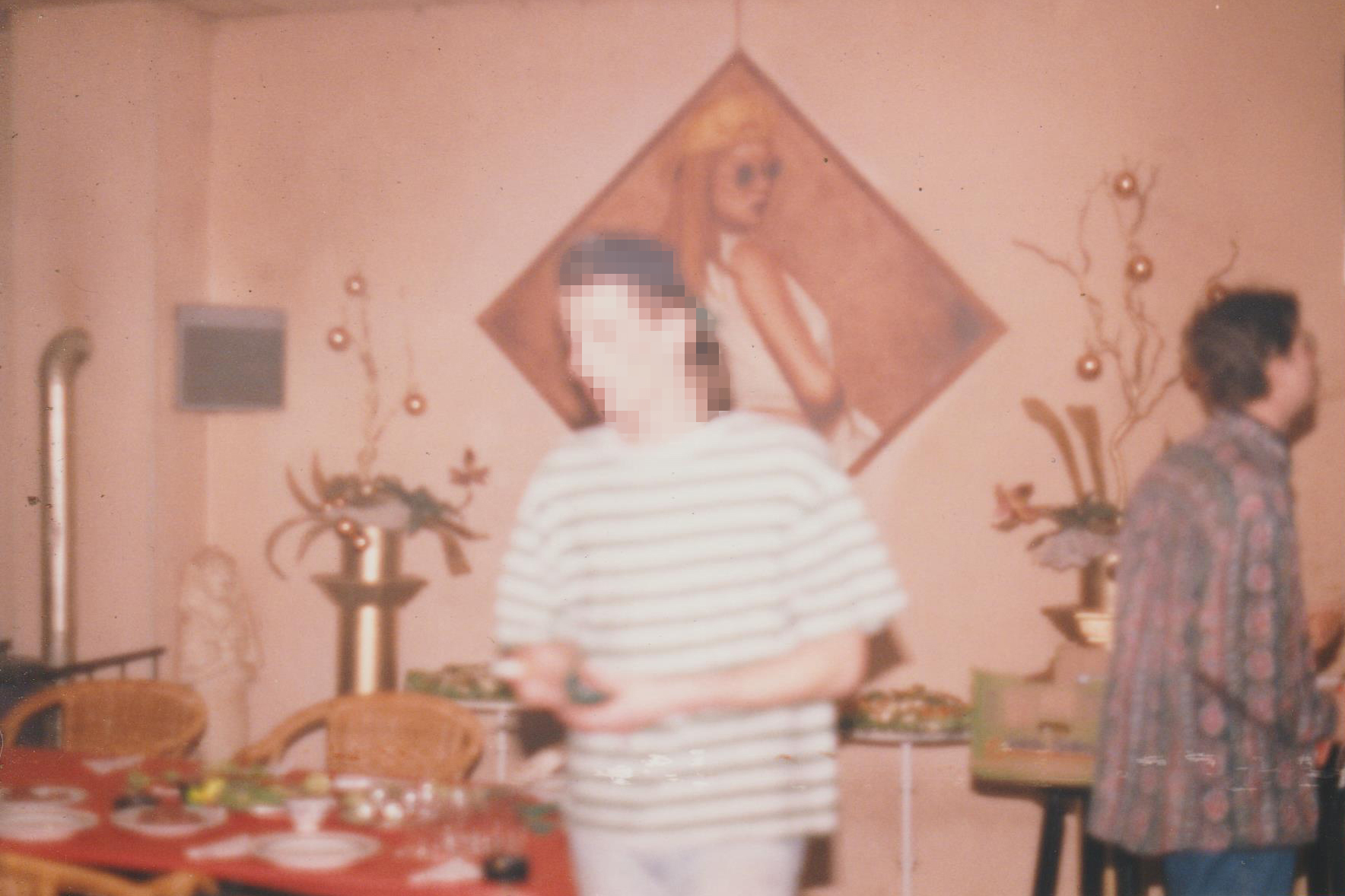 There were also regular performances of a stand-up comedian and live music among other things. In 1996 the German band called Joint Venture played live at, yes, Joint Venture. 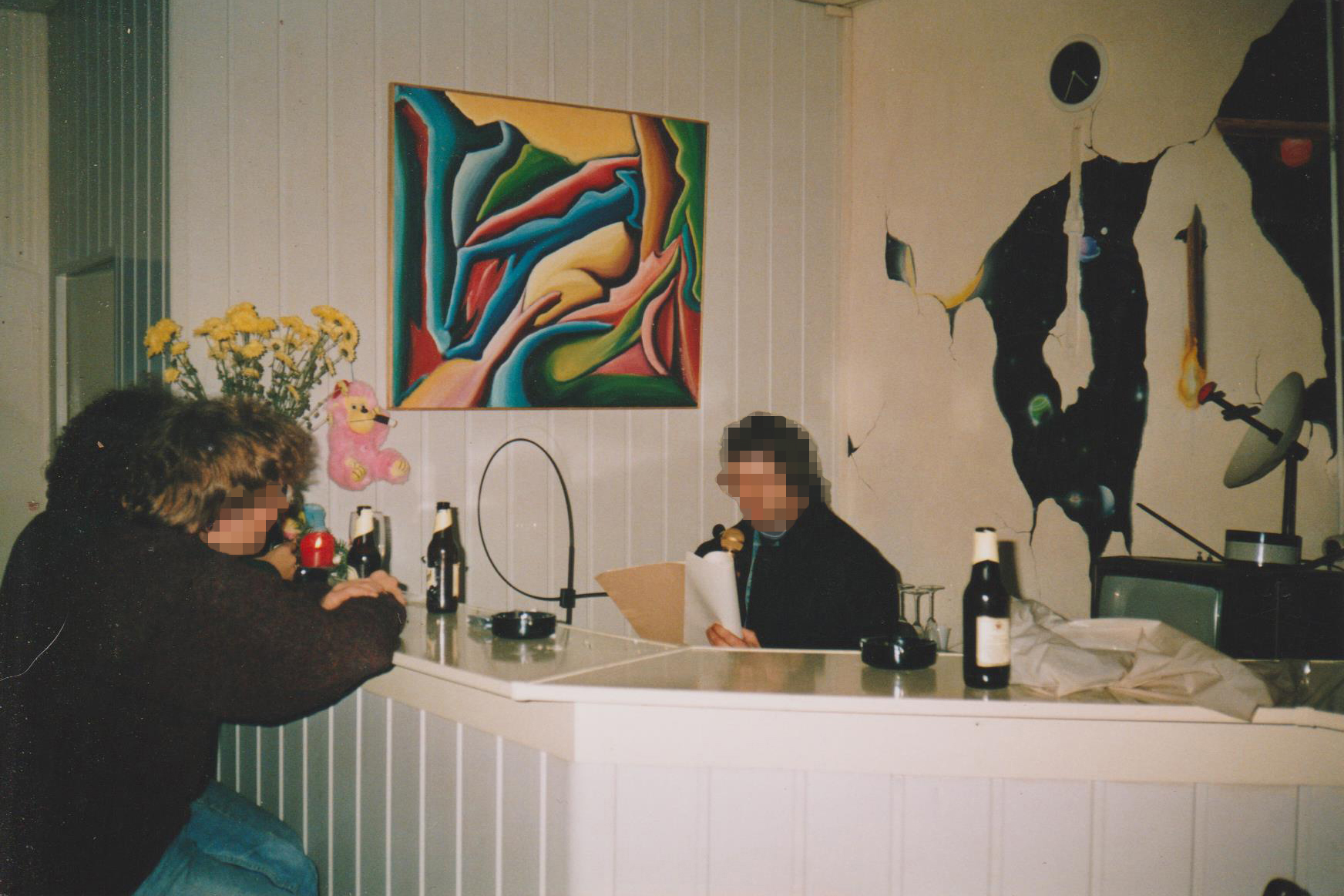 In the same year of 1996, the age limit was also adjusted from a minimum of 16 years to the minimum of 18 years, which is still used today. In 1998 the entire interior was rebuilt to the state what it still looks like today. The balustrade has been thoroughly rebuild due to the arrival of the large game table, the carpet has been replaced by laminate flooring, the plastic chairs have been replaced and the entrance has also been refurbished considerably. The art gallery has always remained and expanded with all the images and paintings that we now also see in Joint Venture.

Even before the millennium, tournaments were regularly organized, but especially in this time it was taken care of seriously by the Arnhem Domino Association "2x nix". 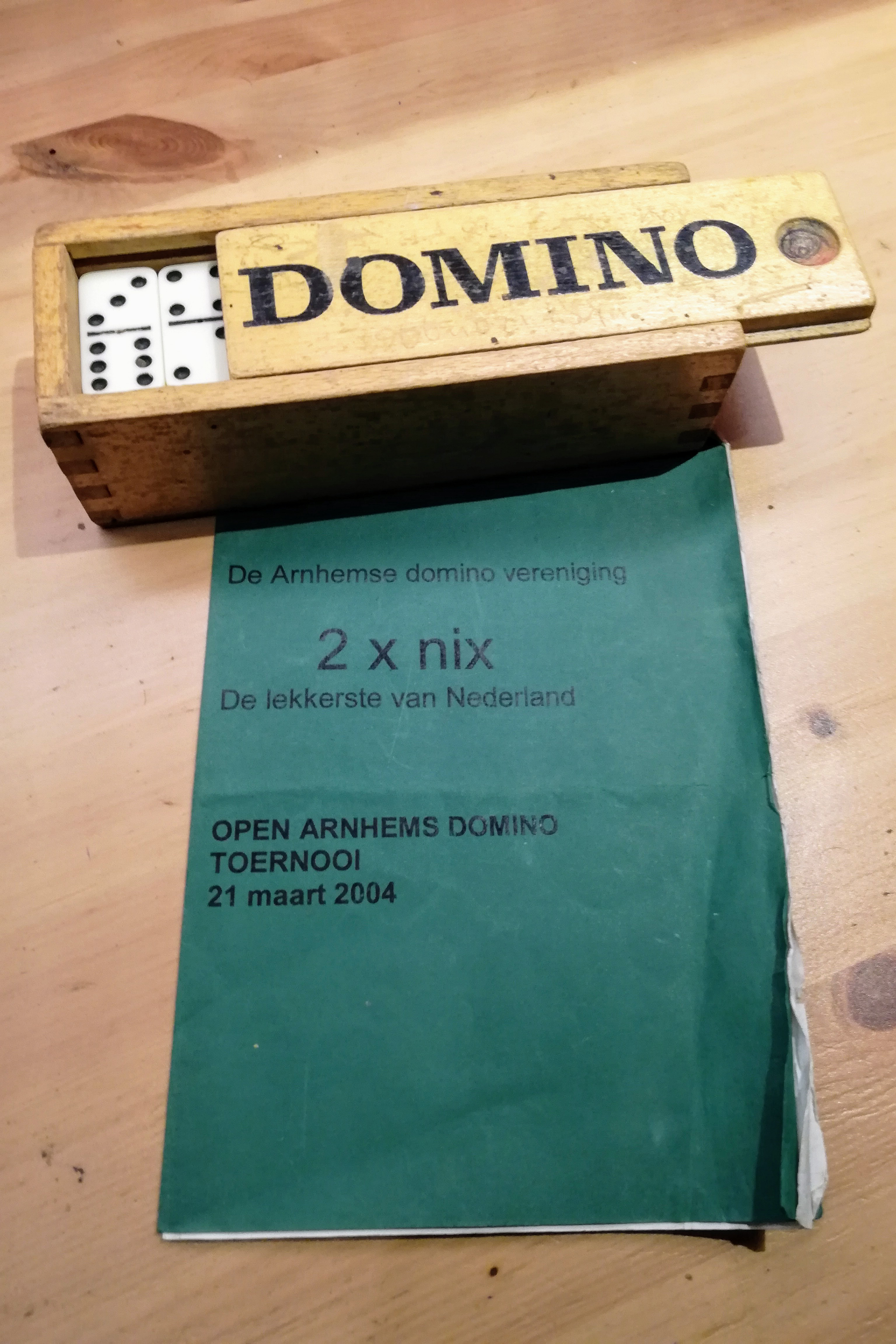 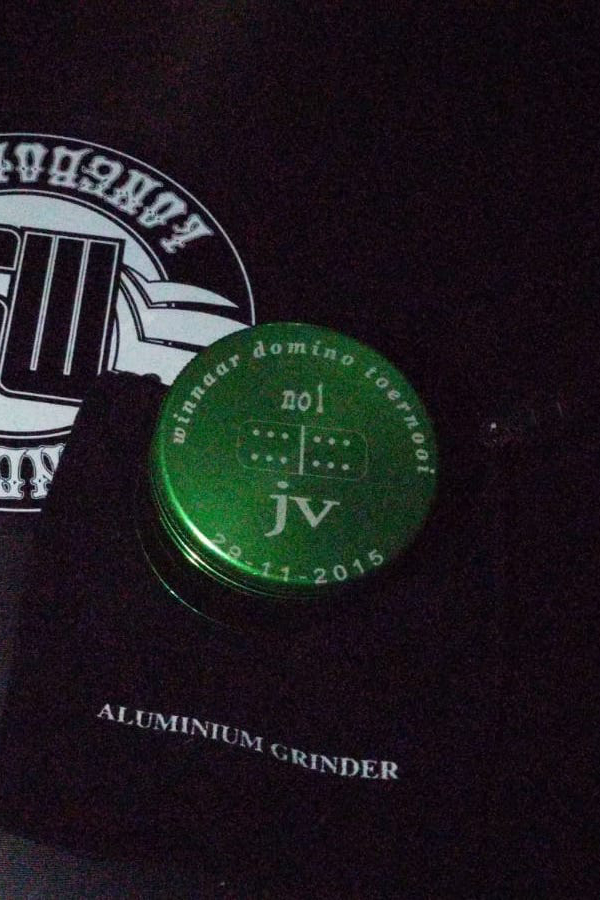 Due to the smoking ban since July 1, 2008, we are also obliged to offer staff a smoke-free space to work in. Given the limited space we have inside, it has been decided to close the staff in a non-smoking area and to let the customers smoke through in their original smoking room. The bar has been given a whole new shape since the renovation in the summer of 2008.

The tournaments have stood still for a few years, but have been picked up again during this time. In addition to domino tournaments, chess tournaments are also organized regularly. The interior has been brightened up here and there with some extra paintings and the refurbishing of the wooden game table with checkers and chessboards. The bar has finally been finished with a beautiful panorama poster behind plexiglass and thanks to the arrival of smartphones, the antique Photoplay became obsoleted and has been removed. The outside walls were refurbished at the end of 2017 and in the following spring the side of the building in the Rozemarijnsteeg was brightened up with a beautiful commissioned work of art by Arnhem Art.

At the moment we have some new plans that will soon be the subject of a new report. To be continued!

Some people smoke weed, others smoke hash. It’s just what you prefer most. But what’s the difference? A bud of weed is nothing but the dried flower top of the female hemp plant. Hashish, on the other hand, is obtained by shaking the resin off the flower tops and then compressing it into a block.

Many people feel the difference between smoking hashish and weed. Some people say that weed makes you feel “stoned” and hashish make you feel “high”. Other people experience it the other way around. In the end, it completely depends on the THC and CBD levels of what you’re smoking, which has effects on your body and mind. This is different for every strain, but in general hashish is slightly stronger than weed grown in the Netherlands (weed grown outside of the Netherlands is often less strong). In addition, the effect of hash and weed also depends on you personally. For example your state of mind, but also your expectations and previous experiences. What’s also a factor is how much food and drinks you had before you consumed weed or hash.

You’ve probably heard of the terms sativa and indica when talking about weed, but what does it mean? It’s not always clear whether the weed you buy is sativa or indica. Basically all strains of weed today are hybrids, due to the countless mixing and matching with the plants since humans started growing it. Often, one of the species is more dominant. Indica-dominant species are generally somewhat more compact and have a stronger scent than species that are mostly sativa. Indica strains often have higher levels of CBD. Sativas have higher levels of THC.

If you want to sit back and relax, you need an indica. Indica provides physical and mental relaxation and has a calming effect. Perfect for lying on the couch watching movies all night. If you don't want to get too sleepy and want to stay a bit more awake, sativa is the one to go. This species of weed gives you an energetic and creative boost, the munchies and maybe you can’t stop laughing. It mainly has a mental effect and if you smoke too much you it is possible that you start hallucinating. Hopefully this helps you with choosing your weed.

If you are planning to smoke (especially beginners!) it is always a good idea to eat something in advance. When someone faints during or after smoking, most of the times, it is because he or she hasn’t eaten. Another cause may be you using it simultaneously with other drugs or alcohol. When smoking a joint, you can get various positive and negative side effects. There is a small chance to go bad on weed or hash just itself. It’s possible you feel sick.

Using weed and hash strengthens your feelings, both positive and negative. It also influences your perception and your imagination will be limitless. Everything is funny and you will have the munchies. But you also can suddenly start to feel very anxious. If you're not in a good mood that day, it might be a bad idea to smoke weed. Chances are that your mood will only get worse.

During and after smoking (and other ways you can consume weed and hashish) your short-term memory, responsiveness and concentration deteriorate. The latter two are also the reasons why you’re not allowed to participate in traffic under the influence of hash or weed. There’s a greater chance to cause a traffic accident, especially if you’ve consumed alcohol too.

If you smoke weed or hashish, it can slowly damage your respiratory system, like tobacco. Usage can also cause your fertility to deteriorate. It’s possible to become addicted to smoking weed, often because you experience it as a habit. It can get in the way of your daily activities. But it doesn’t make you desperately wanting more or heavier drugs. Sometimes, if you smoke too much weed, it’s possible you get into a psychosis. If you are pregnant or have just given birth, as with alcohol and other drugs, you should not use weed or hashish.

To strengthen our dream team, we are immediately looking for a new part-time colleague! We prefer a student, but everyone may apply for this job opening!

What can you expect? 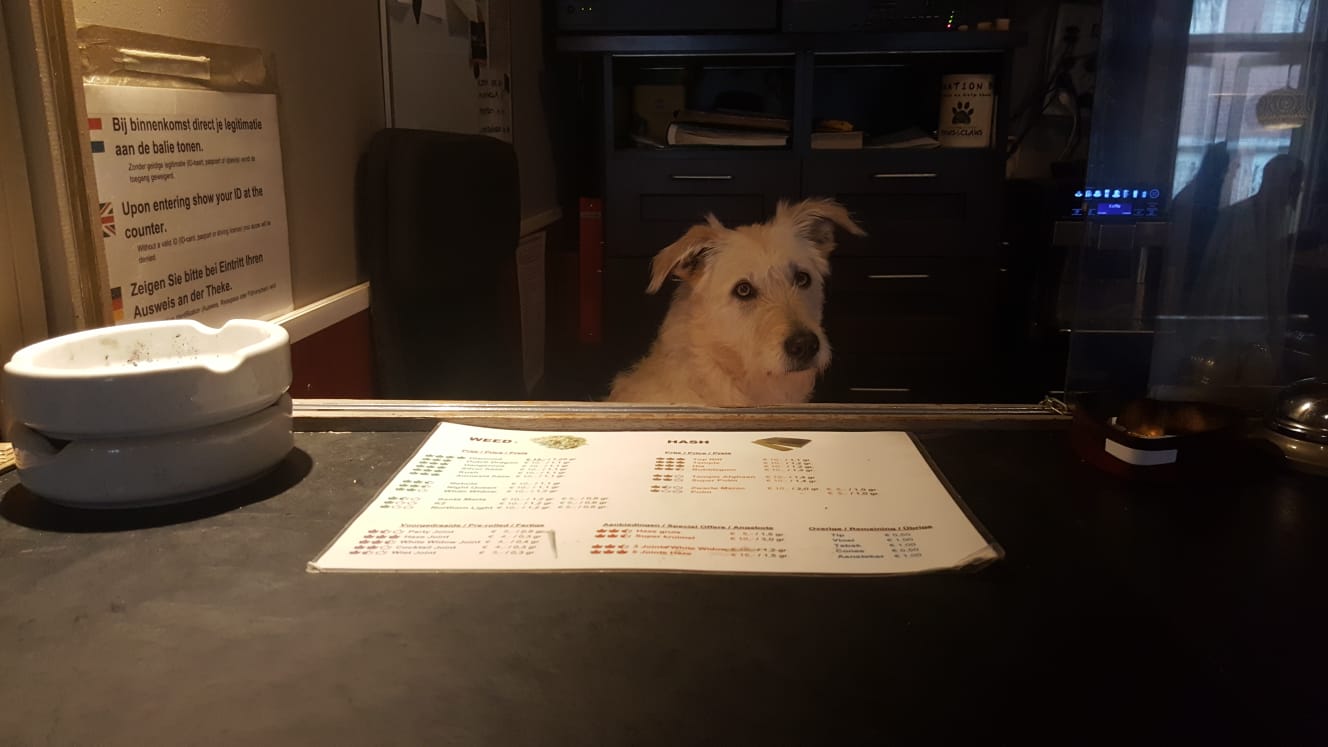 ATTENTION! The data you enter in the form is stored in our own database, but also in Google's. For more information, read our privacy declaration.

We would like to hear what you think about coffeeshop Joint Venture.
Do you want to share your opinion with us? You can do that via this link.
Thanks in advance!

This is what others already said:

Atmosphere & interior: Cozy, comfortable and tropical
Friendliness: 5/5
Enough knowledge about the products: Yes
Quality of the products: 8/10
Price / quality ratio: Good, it is the right quality for an average price. And it is worth it in combination with the atmosphere in the shop!
Points of improvement: Nothing!

Atmosphere & interior: Cozy decor and a pleasant atmosphere
Friendliness: 5/5
Enough knowledge about the products: Yes
Quality of the products: 8/10
Price / quality ratio: I always ask the person behind the counter what's best and it always looks good
Points of improvement: No actually not

Atmosphere & interior: Atmosphere is perfect!! Not many weird people. Interior I think it's ok. Nice and spacious
Friendliness: 5/5
Enough knowledge about the products: Yes
Quality of the products: 8/10
Price / quality ratio: As long as I can enjoy smoking and being with nice people, the price doesn't matter to me. I smoke grit so I can't complain about quality ^ _ ^
Points of improvement: I miss the packed lunches ;)

Atmosphere & interior: Nicely decorated shop with a lot of good people
Friendliness: 5/5
Enough knowledge about the products: Yes
Quality of the products: 8/10
Price / quality ratio: Don't care about the price, I like the atmosphere
Points of improvement: More different music streams

Atmosphere & interior: JV has a great atmosphere, a real living room feeling.
Friendliness: 5/5
Enough knowledge about the products: Yes
Quality of the products: 8/10
Price / quality ratio: The price quality is very neat, but the real reason why you come to JV is for the fun
Points of improvement: That you can pay by card but apparently they have already fixed that

Atmosphere & interior: Atmosphere is relaxed and super cozy and decor feels like home
Friendliness: 5/5
Enough knowledge about the products: Yes
Quality of the products: 9/10
Price / quality ratio: Good, good quality for a good price
Points of improvement: No

ATTENTION! Joint Venture is located in the middle of the city, parking is not possible here. The closest parking places are underneath the station and at the ‘Blauwe Golven’.

We are closed on Christmas Day (December 25th).